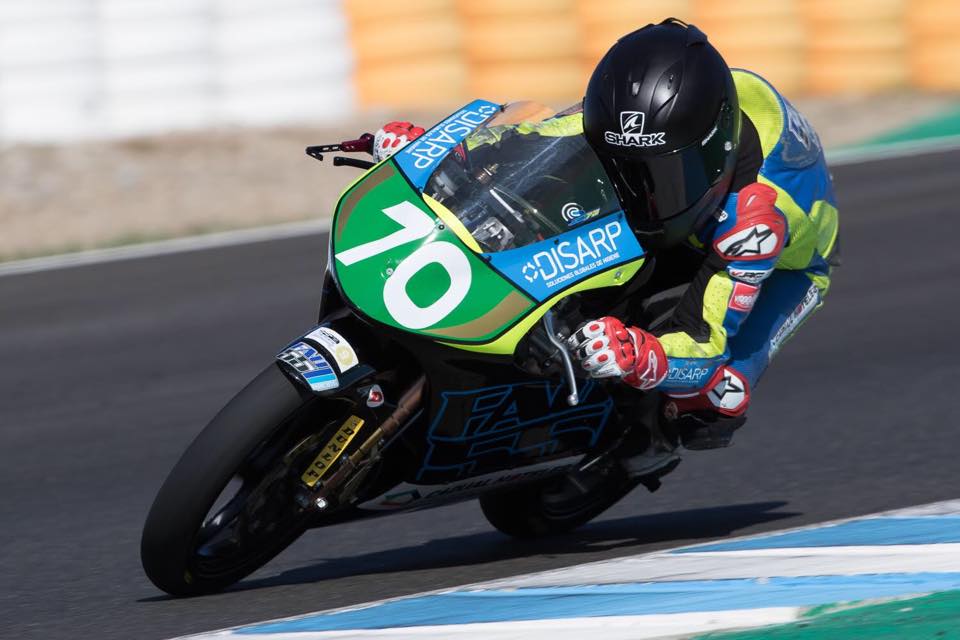 Josh Whatley missed out on the penultimate round at Albacete due to breaking his collar bone after an unexpected accident where a rider collided with him the weekend before at a test.

After intensive treatment for days after the incident at Reydes Fisioterapia in Madrid it was decided by the doctors and RFME that he would not be fit to race the following weekend. Looking then to do everything he could to get fit for his final round in Jerez, he came back to England and thanks to the support of Fatree5 was able to continue his treatment to make sure he was fit enough to ride in Jerez.

After not being on a bike for weeks, fellow racer Max Feeny allowed him to share his bike at the infamous pitbike night at Swindon Karting a day before he flew out to Spain, to see how his shoulder and collar bone would hold out.

Within a few corners Josh was back to his usual self and was all set for the weekend ahead.

The first Free practice at the beautiful Jerez circuit was frustrating as Josh was struggling to find pace but by day 2 he and the team had found a setting that was comfortable for him and showed good pace.

Qualifying came and in Q1 Josh still was struggling a little, getting caught up with traffic. In Q2 Josh managed to break free of the pack and set the fastest lap of the weekend, gaining him his first ever pole position in the Spanish championship and the first ever pole for his team Fau55racing.

Come race day Josh had a great start and led in the first few corners. A leading pack of 12 out of the 30 riders on the grid soon disappeared leaving a huge gap. The racing was extremely close with constant swapping places within that group throughout the race. Josh struggled to get a good feel of the bike in the race but held on to the group, finishing 8th.

All in all it was a very productive but challenging weekend, riding at not full strength but ending up with great results nonetheless.

Josh and his family would like to thank his racing family and team Fau55racing – especially Hector and his wife Krisha who have acted as second parents to josh whilst he stayed out in Spain. He would also like to thank his manager Rhys Edwards, his father Simon – as without his support this would not be possible – and his Mother Ibi  for basically being his Mum, PA and general dogs body. He also wants to thank the rest of his family for everything they do to support him.

Josh now has already tested and showed great pace in Valencia on the Moto3 for 2018 where he will race in the European Talent Cup with FAU55racing and after being selected earlier on in the year will also compete in the British Talent cup.