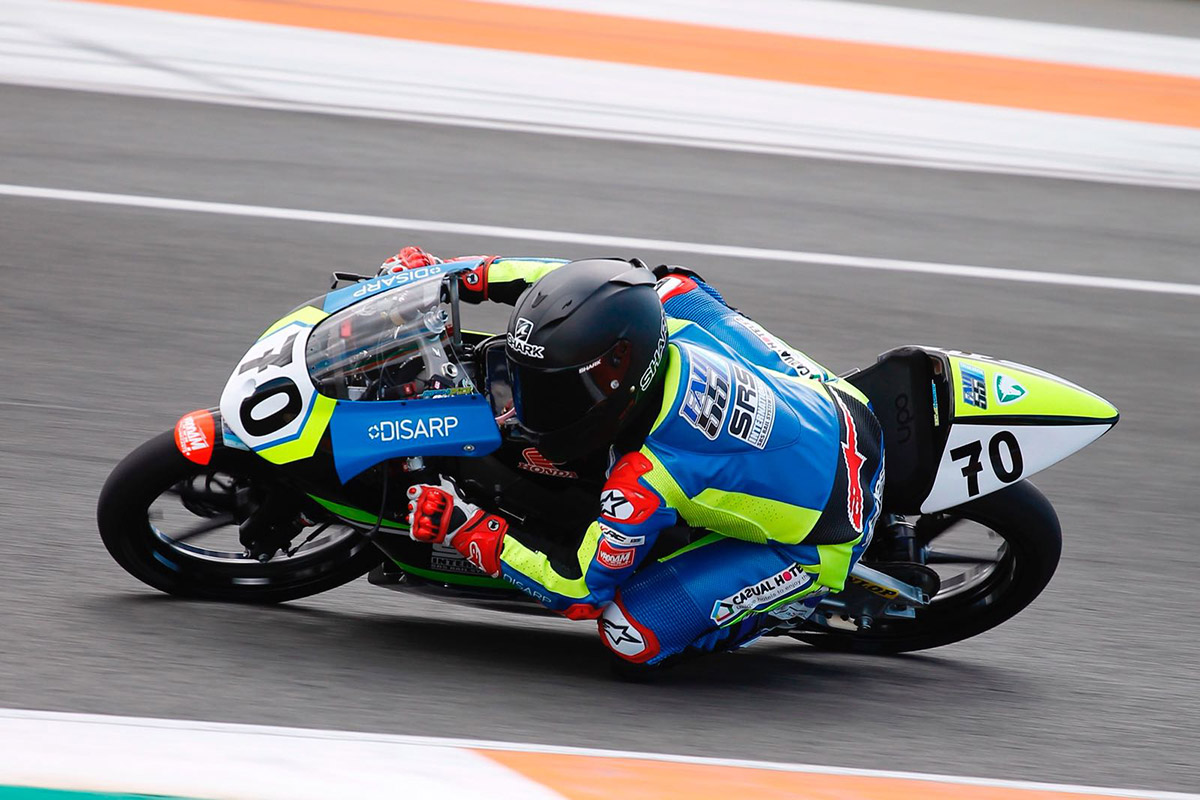 Josh Whatley is too young* to ride in the UK so has been racing in Spain and is starting to make an impression in the very competitive European Talent Cup.

The 12-year-old rookie rides for Héctor Faubel’s FAU55 Racing, and made the top ten at the Ricardo Tormo circuit in round two of the European Talent Cup last weekend. In qualifying, he set the thirteenth best time and was little more than half-a-second off the front row. On a blustery circuit, Whatley went on to finish ninth in the first race, less than 10 seconds behind the race winner. His fastest lap of 1:45.749 was just 0.819 seconds slower than the race winner.

To try and give some perspective on his performance, Josh crossed the line second in a group of four riders battling for eighth position. Ahead of him was European Talent Cup sophomore Ondrej Vostatek. Immediately behind him was 14-year-old Barry Baltus, who won the opening race then stood on the podium again in race two in Estoril. Baltus is also competing in the Red Bull Rookies. Last year he was fourth in the CEV Pre-Moto3. At the back of the group, as they crossed the finish line was Dirk Geiger. The Intact Battery P-MAS rider is a two-time winner of the ADAC North European standard class championship.

Josh said “I had a lot more confidence than in Estoril and I know the track better. The bike was good although I had a couple of problems with the gearbox.”

In the second race, Josh finished 19th. He had to contend with braking issues which saw him run wide a few times and hampered his progress. When all was well he was fast. His fastest lap time of 1:46.279 was better than the rider who finished second and he was second fastest through the speed traps. However, the issues with the brakes meant he overran the corners and finished outside the points.

Josh said “In the second race, I had a problem with the braking and suspension. I couldn’t get the bike to stop and kept running wide. It was only that race though.”

Asked if he was happy with his position after two rounds and he said “I was hoping to be a little bit higher.”

When pointed out how young he was, and that he seemed to be doing well, he responds “It doesn’t matter how old I am, I just hope to always be at the front.”

The next round of the European Talent Cup is not until the 10 June 2018 at the Barcelona-Cataluña circuit. Before that, however, there is the little matter of the British Talent Cup round two at Donington Park over the weekend of the 25 to 27 May 2018.

In the first round, one of the races was cancelled due to the weather. In the one race that the riders did complete, Josh Whatley probably surprised a few people, even if he didn’t surprise himself. He had qualified 13th but rode well enough to cross the line in second position. He was 1.3 seconds ahead of Fenton Seabright and five and a half behind race winner Thomas Strudwick.

“It was a little bit difficult because a lot of the other riders have ridden the track before but it was my first time.” he said.

*At 12-years-old Josh Whatley cannot compete in road racing in the UK, but he is able to ride in Spanish championships. The exception this year is the British Talent Cup which is run by the FIM and under their regulations riders can compete at 12 years of age.